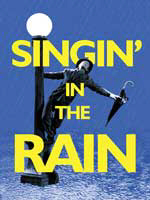 Pittsburgh Civic Light Opera kicked off the season with a 50th Anniversary production of the charming musical classic, Singin' in the Rain, June 4-16, 2002 at the Benedum Center. Starring the incomparable Morgan Fairchild as silent film star Lina Lamont, this captivating collage of dance and dialogue, quips and quarrels and laughter and love comically captures the essence of Hollywood during the 1920's. This time-honored show filled the stage with rousing dances and unforgettable music!